5 reasons to team up with a Shopify Partner

5 reasons to team up with a Shopify Partner

So yes, we’re Shopify Partners and while we believe the badge is a big deal in its own right, there are other benefits too — especially all the cool things we can do for both new and existing Shopify store owners.

So let’s tell you a little more about why it’s an excellent idea for you to seek the help of a Shopify Partner.

What is a Shopify Partner?

In short, Shopify Partners like us are there to help you with the tricky stuff.

If you’ve ever used or experienced Shopify, you’ll already be well aware of how intuitive the eCommerce platform is and how you can achieve success without much in the way of technical knowledge. So you can be forgiven for asking, “Why do I need the help of a Partner?”

As you’ll soon find out, once you want to add functionality that isn’t available with a default Shopify setup or you need to migrate an entire website over to this scalable platform, you’re going to have to call in the experts.

Shopify Partners are experts that have exclusive access to certain Shopify apps and can develop items such as custom themes and apps within the Shopify ecosystem. They also provide a gateway to Shopify’s merchant success staff (successful online entrepreneurs in their own right) who can help implement features proven to drive up revenue.

If you’re still not convinced, let’s give you five reasons to change your mind!

1. Shopify Partners have a track record of success.

In case you didn’t know, they don’t hand out these special badges willy nilly! We had to ‘prove’ that our agency was worthy of the accolade.

What that means for you is that we’ve been there, done that, and got the T-shirt. We are well-versed in all of the platform’s complexities, and we’ve resolved the most common problems associated with high-growth stores and online brands.

Suppose you’re looking to build a serious business online with Shopify. In that case, you need a Partner that knows how to resolve your issues, that can predict when they’ll happen, and will have a proactive solution at the ready.

2. Shopify Partners can implement exclusive apps and features for your online store.

As we’ve already touched upon, we have access to tons of swanky features that aren’t available to members of the public.

By working with a Shopify Partner, you can gain access to exclusive features and apps such as Flow, Launchpad and more complex project elements that facilitate internationalisation, automation, and system integrations.

We also know our way around items such as Shopify Scripts, which give your customers a personalised experience when going through the checkout process. These are all features that you wouldn’t be able to implement on your own without the technical know-how.

3. Shopify Partners have the experience to help you grow.

From your perspective, teaming up with us allows us to take a proactive look at your store and spot opportunities for easy, quick wins for your online store. If we had a pound for every easy conversion-boosting opportunity we’ve spotted with each new business we’ve onboarded, well, we wouldn’t be rich, but you get the point!

And that process never stops. We’re constantly across all of the latest Shopify optimisation techniques, and we’ll bring you anything newsworthy and help you implement new solutions that are nothing less than a brilliant fit for your Shopify store, whether it’s a brand new Shopify store, or an already established one.

The reason we’re across everything Shopify-related is because we have been granted exclusive access to resources and updates that ‘non-Shopify Partners’ simply don’t have.

This means we get to implement and test new products and features before they’re officially released to the public. We can tell you what’s on the horizon in terms of Shopify’s product roadmap and help your store adjust to any upcoming changes ahead of time.

In other words, not only will you never be blindsided by major and minor changes to the platform, but you’ll be at the front of the queue to take advantage of them before they become saturated.

5. We’ve built relationships with developers across the world.

As the old saying goes, it’s not what you know, but who you know. Official Shopify app developers are worth more than their weight in gold, and we’ve got the best ones on speed dial.

We know what all the greatest minds are working on in the Shopify ecosystem, and we can help you implement the latest and greatest custom features before they become widely adopted.

Better still, when the inevitable bug pops up during a rollout of a new feature, we have a direct line of communication with the developers who created it, ensuring we can offer you a lightning-fast resolution to any issues you may be experiencing.

Join forces with Cakecrumbs to build a successful store on one of the world’s most popular eCommerce platform.

We can help you every step of the way, from building your new store from the ground up, migrating your existing online store over to the Shopify platform, to helping you implement cutting-edge conversion-boosting apps on the backend.

If you would like to learn more about what it means to team up with a certified Shopify Partner, don’t hesitate to get in touch. In the meantime, you can find out a little more about our Shopify package options including the costs, right here.

We look forward to hearing all about your online store soon!

This blog article was also published on our main website, Nous Digital. 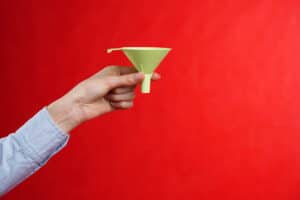 Marketing funnels for dummies: An introduction to the basics

Search engine optimisation (SEO) Vs. Google Ads (PPC): Which should you choose?
Menu